Skip to Main Content
Home > What is the Independent Samples T Test Method of Analysis and How Can it Benefit an Organization?

This article focuses on the Independent Samples T Test technique of Hypothesis testing.

What is the Independent Samples T Test Method of Hypothesis Testing?

Let’s look at a sample of the Independent t-test on two variables. One is a dimension containing two values and the other is a measure. 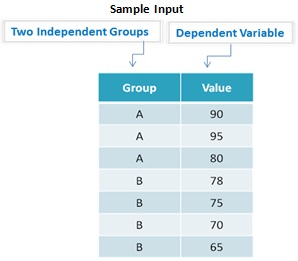 How Can the Independent Samples T Test Method Benefit an Organization?

The Independent Samples T Test Method of Hypothesis testing can be used to address various needs in various types of industries and organizations.

To better understand the benefits of the Independent Sample T Test Analysis, let’s look at two use cases:

Business Problem: An HR Manager wants to find out whether male employees earn more than female employees. Here, the dependent variable would be ‘Total Annual Income’.

Business Benefit: Once the test is completed, a p-value is generated which indicates whether there is a statistical difference between the income of two groups. Based on this value, a manager can easily conclude whether the average income earned by female employees is statistically different from male employees and if the different is statistically significant they can further conclude which gender earns higher or lower salaries.

Business Problem: A Grocery store sales manager wants to know whether customer segment A spends more on groceries than customer segment B. Here, the dependent variable would be ‘Purchase Amount’.

Business Benefit: Once the test is completed, a p-value is generated which indicates whether there is a statistical difference between the purchase amounts of both segments. Based on this value, the grocery store manager can decide on its marketing strategies for better sales and increased revenue.

The Smarten approach to augmented analytics and modern business intelligence focuses on the business user and provides tools for Advanced Data Discovery so users can perform early prototyping and test hypotheses without the skills of a data scientist. Smarten Augmented Analytics tools include assisted predictive modeling, smart data visualization, self-serve data preparation, Clickless Analytics with natural language processing (NLP) for search analytics, Auto Insights, Key Influencer Analytics, and SnapShot monitoring and alerts. These tools are designed for business users with average skills and require no specialized knowledge of statistical analysis or support from IT or data scientists. Businesses can advance Citizen Data Scientist initiatives with in-person and online workshops and self-paced eLearning courses designed to introduce users and businesses to the concept, illustrate the benefits and provide introductory training on analytical concepts and the Citizen Data Scientist role.

Original Post: What is the Independent Samples T Test Method of Analysis and How Can it Benefit an Organization?

Use a BI Tool with Cross-Tab Deep Dive Features!

Take the Mystery Out of Predictive Algorithms for Your Users! Dec 5, 2022