Skip to Main Content
Home > Wake Up India! Our Educational System Is NOT As Glorious As You Think! 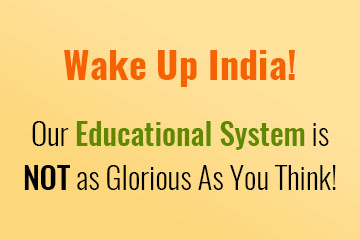 A recent India Times Article revealed that students in India rank second to last (ranking only above Kyrgyzstan) when tested against a global student population. These results are jarring but many Indian citizens may believe they could not be true. After all, we have proudly proclaimed our elevated status for decades. But, test results don’t lie!

So, how is it that we could have been so wrong about our educational system and the caliber of students it produces? In truth, the misperception is a result of numbers. It is true that India is considered a powerhouse of engineering and software and other skills around the world. India’s citizens hold visas and work around the world in technology businesses with great success.

But, the idea that our educational system produces superior students and candidates should not lead us to the conclusion that all of our students are successful. Those who excel and succeed are a small percentage of our huge population of more than 1.3 billion people.

You can read the details of this global student ranking and India’s comparative results here: India Times Education Article

If we are to improve our global competitive position and the opportunities for and potential of India’s students and young people, we need a comprehensive educational reawakening. That reawakening must include a review of our curriculum, public funding, private sector participation in the educational system, and pay scales and support for our teachers and professors. If we want to rise in the global ranks, we must take on these issues and resolve them.

The time has come to face the truth. We can no longer afford to promote misconceptions. Our students, our businesses and our country will benefit from a reimagining of our educational systems.

Good enough is NOT good enough!

Original Post : Wake Up India! Our Educational System is NOT as Glorious As You Think!

Use a BI Tool with Cross-Tab Deep Dive Features!

Take the Mystery Out of Predictive Algorithms for Your Users! Dec 5, 2022